Aram Boghosian for the Boston Globe

Annette Petersen, 93, works on a Wee Forest Folk piece in her Carlisle studio, where the family-run enterprise specializes in crafting tiny mice as part of its line of collectible figurines.

Article found at the Boston Globe

In one room, hands ply and mold bits of clay. In another, airbrushes delicately puff out the slightest touches of paint. Elsewhere, heads hunch in inspection, and fingers adeptly connect tiny parts.

Annette Petersen’s Carlisle studio is not unlike Santa’s workshop — albeit modernized, and with a singular purpose: to turn out hordes of miniature, whimsical mice.

Forty years ago, Petersen created her first, and admittedly rustic, mouse figurine. Today, the mother of three and grandmother of four oversees Wee Forest Folk,  a family-run enterprise that crafts hundreds of itsy-bitsy sculptures for shops (and fervent fans) all over the country.

“I never expected it,” said Petersen, who at 93 is spry, witty, and still sculpts regularly. With a shrug, she mused of her success, “It’s amazing.”

Her company’s line of mice — about 200 models are currently in production, and most no bigger than a couple of inches — includes furry, pink-nosed, big-eared creatures catching butterflies, chewing watermelon, feeding birds, pumping iron, playing golf, getting married, riding motorcycles, trick-or-treating, and building snowmen. There are even adorable rodent Romeos and Juliets professing love for each other, and others commemorate Christmas, Easter, and Valentine’s Day; a few dozen new figures are released each year. 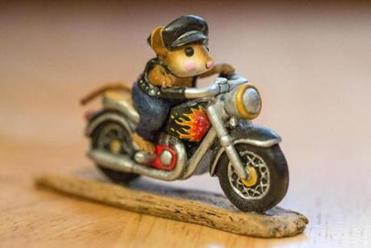 There have also been bears, bunnies, opossums, and turtles included in the mix of Wee Forest Folk offerings, but the mice have always been the draw.

“It’s what people like, and I enjoy doing them,” said Petersen, a tiny figure herself, dressed in jeans and a blue sweater accented with a Christmas tree brooch, and a blue bow in her white hair. “With their little noses and ears, you can make them look really cute.”

She, her son Willy, and daughter Donna create each form in clay; then each piece is painted, assembled with minuscule accoutrements like flowers, books, bows, and candy canes carefully set in place, and “tailed” by the shop’s 25 employees or 20 home-based painters, who brush details on by hand.

The process, finely tuned over the decades, allows the shop to annually create thousands of the figures, which retail anywhere from $52 to $495 through the Wee Forest Folks catalog or smaller specialty shops (not department stores or retail chains).

Petersen is also particularly proud to be a family business: 57-year-old Donna, for instance, opted out of a medical career to be a sculptor, while Willy, 58, diverted from his plan to become a dentist.

Working with self-hardening clay, they form and shape the Lilliputian creatures, using their hands, brushes, water, X-Acto knives, and even toothbrushes.

“You have to be patient,” Donna, with clay caked beneath her fingernails, said on a recent sunny winter afternoon as she worked on creating a base with rustic floorboards and a braided rug. “You have to be willing to just sit there until you get it right.”

Nearby shelves were crammed with boxes of hundreds of miniature accessories; in an adjacent room, airbrush artists were tending to their meticulous work; in another, two assemblers attached tails and bases to half-finished pieces.

Meanwhile, in an office in the back, Petersen was at work on a mouse hardly bigger than a thimble, doctoring a broken-off ear.

“All right, now I have decisions to make,” Petersen said as she inspected the damaged part and brushed it lightly with water. “What is this little mouse going to be doing? It can’t just stand there.”

To foster those ideas, she looks through children’s books and studies real mice.

“There’s something intangible that she just looks for,” her daughter said, marveling. “If it doesn’t speak to her, she’ll just keep doing it.”

It is the fastidious and hard-working demeanor of a woman who grew up in a poor family in New York City. She never had any art training, so “her imagination was all she had,” Willy explained.

In 1949, she and her husband, Richard — they’ve been married for 63 years, after a chance meeting while sunbathing on a Coney Island beach — moved to Concord, and, as she described it, “I started using my hands to make different things.”

Her first creations were stone owls with glass eyes; soon she moved on to sun catchers, crafting frogs, snails, whales, owls, and turtles out of circular pieces of clear glass.

Then came her first mouse; made from bread dough, it had a pipe-cleaner tail and red berry eyes. Because it was too “realistic” looking, she said, on a whim she stood it up and decked it with an apron and a hat.

Although it was “primitive,” it was the first of her Wee Forest Folk.

From there, she evolved to more molds and different scenarios, with mice wearing dresses, scarves, bows, baseball caps and overalls, and drinking tea, playing piano, kayaking, riding a broomstick and romancing one another.

Until 1990, nearly all of them were created in her kitchen, until the operation simply became too big.

Over her 40 years in business, she has supplied numerous specialty shops, as well as a franchise known as the “Mole Hole,” and has displayed at trade shows, while fostering a cache of devoted fans.

“We have such a loyal following,” Donna said as she sat with her mother and brother in their studio, Petersen’s table cluttered with plastic containers of clay, pens, and brushes, with a small snapshot of a mouse (for inspiration) taped to an extendable lamp snaked with garland.

Those voracious collectors put on three expos a year, request tours of the shop (with some even crying when they meet Petersen), and some make it a point to collect every single figurine.

“A lot of friends have been made through Wee Forest Folk,” said Petersen.

That includes her — she described her employees as “another big family,” and, although her fingers are becoming a bit stubborn with age, she still enjoys sculpting and creating.

So, as a hale nonagenarian, what’s her secret to long life? FREE Mini Watering Can With Order

Sign up to get the latest on sales, new releases and more …